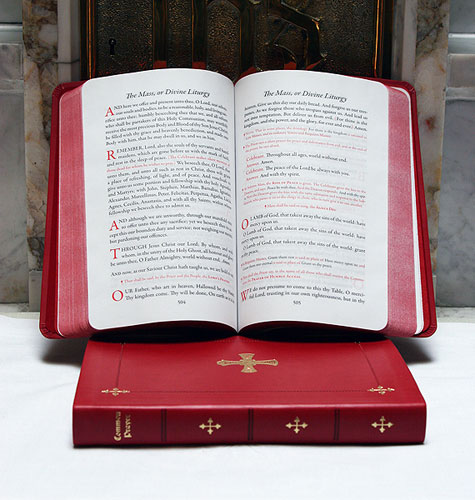 When the Protestants split from the Catholic Church in England in the 16th century, they changed the Mass to reflect their heretical beliefs. The altars were replaced by tables. Latin was replaced by English. Statues and icons were removed from the churches. The Last Gospel and the Confiteor were abolished. “Communion” was distributed in the hand. Mass was said out loud and facing the Congregation. Traditional music was discarded and replaced with new music. Three-fourths of the priests in England went along with the New Service.


This is an interesting article of the similiarities between the false New Mass and the 1549 Anglican Prayer Book (Book of Common Prayer). 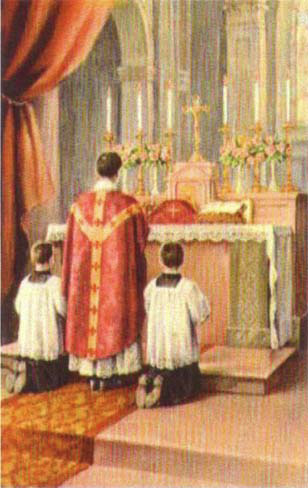 When the Protestants split from the Catholic Church in England in the 16th century, they changed the Mass to reflect their heretical beliefs. The altars were replaced by tables. Latin was replaced by English. Statues and icons were removed from the churches. The Last Gospel and the Confiteor were abolished. “Communion” was distributed in the hand. Mass was said out loud and facing the Congregation. Traditional music was discarded and replaced with new music. Three-fourths of the priests in England went along with the New Service.

This is also precisely what happened in 1969, when Paul VI promulgated the New Mass, the Novus Ordo Missae. The similarities between the 1549 Anglican Prayer Book (Book of Common Prayer) and the New Mass are striking. One expert noted:

“The extent to which the Novus Ordo Mass departs from the theology of the Council of Trent can best be gauged by comparing the prayers which the Consilium removed from the liturgy to those removed by the heretic Thomas Cranmer. The coincidence is not simply striking – it is horrifying. It cannot, in fact, be a coincidence.” (Michael Davies, Pope Paul’s New Mass)

In order to emphasize their heretical belief that the Mass is not a sacrifice, but just a meal, the Protestants removed the altar and put a table in its place. In Protestant England, for example, “On November 23, 1550 the Privy Council ordered all altars in England destroyed and replaced by communion tables.” (Warren H. Carroll, A History of Christendom, Vol. 4 (The Cleaving of Christendom), Front Royal, VA: Christendom Press, 2000, p. 229)

The chief Protestant heretics declared: “The form of a table shall more move the simple from the superstitious opinions of the popish Mass unto the right use of the Lord’s Supper. For the use of an altar is to make sacrifice upon it: the use of a table is to serve men to eat upon.” (Michael Davies, Cranmer’s Godly Order, Fort Collins, CO: Roman Catholic Books, 1995, p. 183) The Welsh Catholic martyr, Richard Gwyn, declared in protest against this change: “In place of an altar there is a miserable table, in place of Christ there is bread.” (Michael Davies, Pope Paul’s New Mass, p. 398)

And St. Robert Bellarmine noted: “… when we enter the temples of the heretics, where there is nothing except a chair for preaching and a table for making a meal, we feel ourselves to be entering a profane hall and not the house of God.” (Octava Controversia Generalis. Liber Ii. Controversia Quinta. Caput XXXI)

Just like the new services of the Protestant revolutionaries, the New Mass is celebrated on a table.

The 1549 Anglican Prayer Book (Book of Common Prayer) was also called “The Supper of the Lord, and the holy Communion, commonly called the Mass.” (Michael Davies, Cranmer’s Godly Order, p. 65) This title emphasized the Protestant belief that the Mass is just a meal, a supper – and not a sacrifice. When Paul VI promulgated the General Instruction for the New Mass, it was entitled exactly the same way. Its title was: “The Lord’s Supper or Mass.” (Michael Davies, Pope Paul’s New Mass, p. 285)

The 1549 Anglican Prayer Book (Book of Common Prayer) removed from the Mass the psalm Give Judgment for me, O God, because of its reference to the altar of God. This psalm was also suppressed in the New Mass.

The 1549 Anglican Prayer Book removed from the Mass the prayer which begins Take away from us our sins, because it evokes sacrifice. This was also suppressed in the New Mass.

The prayer which begins We beseech Thee, O Lord, refers to relics in the altar stone. This prayer has been suppressed in the New Mass.

In the 1549 Anglican Prayer Book the Introit, Kyrie, Gloria, Collect, Epistle, Gospel and Creed were all retained. They have all been retained in the New Mass.

The equivalent to the Offertory Prayers: Accept, O holy Father… O God, Who has established the nature of man… We offer unto Thee, O Lord… In a humble spirit… Come, Thou Sanctifier, almighty… and Accept, most holy Trinity, were all suppressed in the 1549 Anglican Prayer Book. They have all been suppressed in the New Mass, except for two excerpts.

In the 1549 Anglican Prayer Book, the Lift up your hearts dialogue, Preface and Sanctus were all retained. They have been retained in the New Mass.

The Roman Canon was abolished by the 1549 Anglican Prayer Book. It has been retained only as an option in the New Mass.

The Arch-heretics of the Protestant revolution Thomas Cranmer (the author of the 1549 Anglican Prayer Book) and Martin Luther both abolished the prayer Deliver us, O Lord – probably because it mentions the intercession of Our Lady and the saints. Only a modified version of this prayer has been retained in the New Mass, with no invocation of saints. It should also be noted that the Offertory prayer in the New Mass which begins Blessed are you, Lord, God of all Creation is taken from a Jewish Table Prayer. (Michael Davies, Pope Paul’s New Mass, p. 320)

In fact, the Novus Ordo Mass also removed the traditional Good Friday prayer for the conversion of the Jews. This prayer has been replaced with a prayer, not that the Jews convert, but that they “grow” in faithfulness to His covenant! Thus, there is an expression of apostasy right in the official Good Friday prayer of the New Mass. It’s a promotion of Judaism and the heresy that the Old Covenant is still valid.


In the 1549 Anglican Prayer Book (Book of Common Prayer), the equivalent of the prayer which begins, May the Mingling and Consecration of the Body and Blood, was abolished. It’s very interesting that only a modified version of this prayer has been kept in the New Mass with the important word “consecration” removed.

The 1552 version of the Anglican Prayer Book instructed that Communion was to be given in the hand to signify that the bread was ordinary bread and that the priest did not differ in essence from a layman. (Michael Davies, Cranmer’s Godly Order, p. 210)

The New Mass implements Communion in the hand in almost every place in the world, and it even goes farther than Cranmer by allowing communicants to stand and receive from a lay minister.

The prayers in the Traditional Mass which begin with: What has passed our lips as food and May Thy Body, O Lord, which I have eaten both make explicit reference to the Real Presence of Christ in the Eucharist. Both have been suppressed in the New Mass.

The prayer which begins May the tribute of my worship be pleasing to thee, most holy Trinity, was the least acceptable prayer after Communion to all the Protestants, because of its reference to propitiatory sacrifice. Martin Luther, and Cranmer in his Anglican Prayer Book, suppressed it. Following their lead, it was suppressed in the New Mass.

The prayers after the Traditional Mass, the Leonine Prayers, including the Hail Mary; the Hail Holy Queen; the O God our refuge; the prayer to St. Michael; and the appeal to the Sacred Heart, formed, in practice, an important part of the liturgy. Five prayers less compatible with Protestantism could hardly be imagined. They have all been suppressed in the New Mass.

Considering all of this, even Michael Davies agreed: “It is beyond dispute that… the Roman Rite has been destroyed.” (Michael Davies, Pope Paul’s New Mass, p. 504) 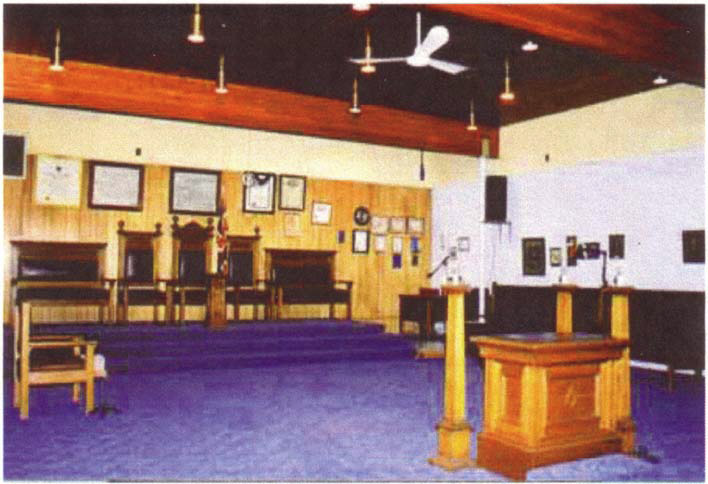 
And here is a Novus Ordo church: 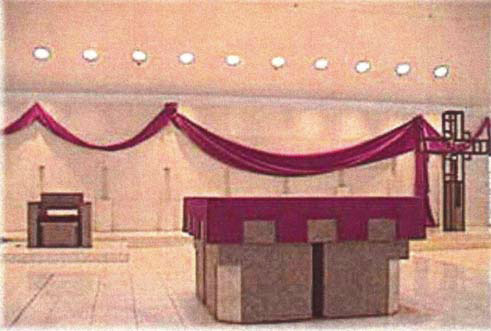 The two are almost indistinguishable; the focus of both is on man, with the Presider’s Chair in the middle and a circular emphasis. Perhaps this is because the primary architect of Paul VI’s New Mass was Cardinal Annibale Bugnini, who was a Freemason.

“Cardinal” Annibale Bugnini was Chairman of the Consilium which drafted Paul VI’s New Mass. Bugnini was initiated into the Masonic Lodge on April 23, 1963, according to the Masonic Register in 1976. (Also discussed in Pope Paul’s New Mass, pp. 102; 504-505)

More on this can be watched in the informative movie below:

Why the New Mass and New Rite of Ordination are Invalid 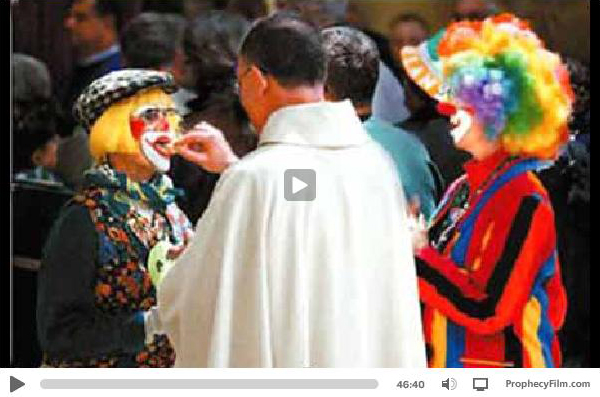